This great hymn, Jesus, the Lord of Life, fills a real need in our Catholic churches today, where the music and hymnody most often seem far away from the promotion of the Sanctity of Life.""The Apostle for Life," Father Paul B. Marx, O.S.B. 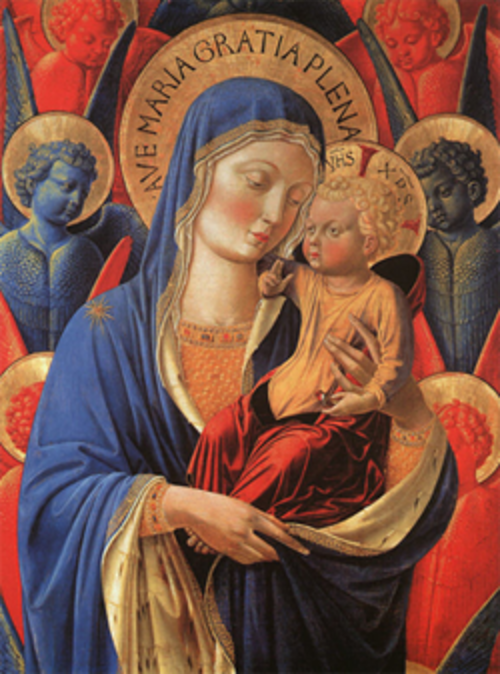 Hear a two minute mp3 sample of Jesus, the Lord of Life.*

Hear a more casual, less formalized version of Jesus, the Lord of Life.**

Read a letter sent to all priests in the Diocese of Fort Wayne - South Bend. 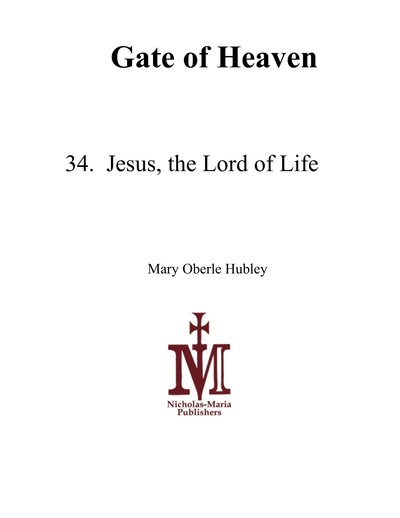 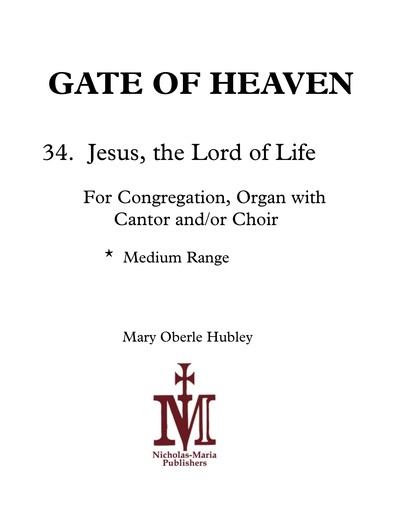 Singing Pro-Life in Your Churches

Hymnody which is authentically Catholic plays an indispensable role in the
evangelization of our Catholic people (and others) to the Culture of Life. I submit that it is the undeniable absence of pro-life, pro-family liturgical hymnody which has largely contributed to the anomaly of the undisputed statistic that 70% of Church-going Catholic couples of childbearing age use contraceptive or sterilization methods to prevent (their) children from being born.

Sophisticated professional polls only confirm what even the casual churchgoer has observed in most parish churches over the last forty years: namely, that rarely were there present families which included more than two or three children. The happy exception to this commonly known fact is represented by the increasingly ubiquitous homeschooling families. Typically, it is common that parents of these families have chosen to adopt a radical response to the Church’s encouragement of openness to human life. Their honest, total fidelity to the Church’s teachings in regard to the sanctity of human life, the blessedness of children, and the holiness to which family life is called to develop, is coupled to their rejection of unnatural, drug-related invasions of family life by means of contraceptives. How eloquent is the example set by these homeschooling parents to their always-watching children, their extended families, and to their fellow parishioners!

Given the widespread confusion regarding the Church’s teachings evident in most Catholic parishes, an oftentimes unadmitted disaffection seems to have saturated the ranks of the Catholic laity in regard to its “openness to life.” (Thus, the small families.) It is opportune that we examine a factor which lies, undeniably, at the heart of the Roman Catholic parish experience.

The late Msgr. Richard J. Schuler (1920-2007), for over a quarter century the founding editor of Sacred Music and Pastor Emeritus of Saint Agnes Church in Saint Paul, maintained throughout his lifelong commitment to the integrity of Catholic Church music that “popular (from populus,“of the people”) hymnody captures the imagination of the (Catholic) people.”

...of my family’s leaving our parish church after weekly Mass and devotions are redolent of my father’s mellow, golden tenor voice, singing (or whistling) the melodies of vernacular hymns on our brisk walk home. My parish church (Our Lady of Perpetual Help, in the “Calumet Region” of Indiana, abutting Lake Michigan) boasted several choirs through the 1960s, as was typical of all the parishes in the Region; children’s, men’s, and mixed adult choirs were the rule. All the faithful of Our Lady’s were thus well-experienced in hearing, and sometimes in singing ancient Gregorian melodies, whether those of the Ordinary (the unchanging texts of the Mass, such as the Kyrie, Gloria, Credo, Sanctus, and Agnus Dei); or of the seasonally changing texts known as the “Propers” (comprising the  Introit, Gradual, Offertory, and Communion verses).

Added to this diet of chanted “monophony” (i.e., a single melody line) were the simple Latin motets (from the French mot,or “short”), sacred choral songs known also as simple, or easy “polyphony” (i.e., having two or more independent, but simultaneous, melody lines).  Small churches such as Our Lady’s, though bursting at the seams with 2500-plus families, most often had its choirs using either the St. Gregory’s Hymnal, or the St. Basil Hymnal, both popular church hymnals at the time. Memorable favorites from these collections were Inviolata Integra, O Res Mirabilis, O Esca Viatorum, Jesu, Dulcis Maria; Panis Angelicus, and many others.

Inexplicably to me, though...

...my dad never did sing chant, or polyphonic melodies on the walk home. Nor did he sporadically burst forth with that Sunday’s chant propers (the Latin psalm verses), not even just the melody, even though it consisted of a simple, chanted “psalm-tone.”  Neither did he sing selections from the Ordinary of the Mass, such as a Kyrie, or a snippet or two from the Gloria. Though much less often, I must admit to remembering my dad singing the plaintive melody of “O Salutaris Hostia” on a rare occasion.

Not so with the Latin chant, whether from the Ordinary or from the Propers of the Mass. You must keep in mind that, having been taught by the good Franciscan Sisters at St. Boniface Church in Lafayette, Indiana (c. 1928), my dad’s training in “service at the altar” must have been formidable. He could reel off his altar boy Latin like a second tongue, even fifty years later. Why, then, did he not sporadically sing Latin chant?

It could be that the more “catchy” nature of popular hymnody might account for this, whether it be in the Latin or in the vernacular. Think of, say, Immaculate Mary, or of Come, Holy Ghost, or the English verses to the Stabat Mater; or, for that matter, the Benediction hymns, O Salutaris Hostia and Tantum Ergo. Their self-contained, short-phrased melodies, coupled to the easy memorability of their simple English lyrics (or brief Latin texts), seemed to somehow lend them to spontaneity, and to the exuberance consonant to familiarity.

However, the music associated with Gregorian chant...

. . . and with simple polyphony such as that sung at Our Lady’s was of a totally different genre. Its oftentimes lengthy, linear melodic movement was untied to dependence upon a major or minor key. Chant being modal (Latin, modus, i.e., forms or patterns), its tonal “sense” was derived from the Greek modes, or scales. Nor did the chant have a measured rhythm, as we of the West understand rhythm to be: as in a measured motion with cadences and interruptions of melodic flow, such as with music put to strophic verse.  It was somehow otherworldly, and seemed to be more of a contemplative nature. Lacking definiteness, chant seemed profound in its effect upon the hearer, and upon one’s remembered experience of it, too.

Perhaps, being a writer of Catholic hymnody and an often-heard singer myself, my off-hand recollections about the impressions of these contrasting types of Catholic liturgical music are too close to qualify as valid; this could be.

However, we cannot deny the truth of Monsignor Schuler’s maxim: that popular hymnody ”captures the imagination” of the Catholic people; nor can we honestly deny the truth of lex orandi, lex credendi (cantandi) as valid principles.

I would propose, though, that we of the Church of the English-speaking countries ought to look into the matter as to how our congregational singing affects, through its total absence, the actual depth of our pro-life sentiments.

Lest the battle for the culture of life grind on...

. . . for yet another fifty years, I believe it is imperative for priests and leaders in parishes to recognize, and to implement, the powerful nature of appropriate hymnody such as Jesus, the Lord of Life in instructing, informing, and encouraging to holiness our Catholic people.

One cannot overstate the necessity of using liturgical hymnody which celebrates the sanctity of life, the blessedness of children, and the family’s call to holiness, in our Catholic churches.

Just as a people’s national identity is defined...

. . .  and celebrated through its patriotic song; likewise, the communal singing of national aspirations binds the community together and instills in the members commitment to a common purpose, and to a common understanding. It should be no surprise to us that, in spite of the ensuing fifty-plus years of pro-life efforts following Roe, the actuality of the Church-going Catholic people’s actual commitment to all the life issues is only skin-deep.

The Church  has continually acknowledged,  from the earliest centuries, that worthy Catholic hymnody:

The eminent teacher, Father John Hardon, S.J. (1914-2000) once said that the "powerful teaching effects of using a strong, worthy Catholic hymn were commensurate to those acquired through attendance at weeks, and even months, of lectures."

Such is the power of strong Catholic hymnody:  music, in Pope John Paul II’s words, “informed with the interior life of the Church.”

** Displays the possibilities for non-liturgical, non-ecclesial renditions of Jesus, the Lord of Life, such as for use at youth fests, public pro-life concerts, school assemblies, etc. The composer is the vocalist.

*  Please honor the composer’s request that, due to the sacred nature of the Catholic liturgy, and the solemn requirements of liturgical worship, only the organ version be used within Catholic churches.

The recorded organ rendition of Jesus, the Lord of Life is found in Gate of Heaven, Part III: Mary, Mother of the Eucharist.

Several years ago I represented my three brothers and sister when, after our dear mother's death on Easter Tuesday, I met with the organist... END_OF_DOCUMENT_TOKEN_TO_BE_REPLACED

Mary Oberle Hubley is the homeschooling mother of seven now-adult children, including two born in Seoul and Pusan, Korea. With her husband, Murray,... END_OF_DOCUMENT_TOKEN_TO_BE_REPLACED