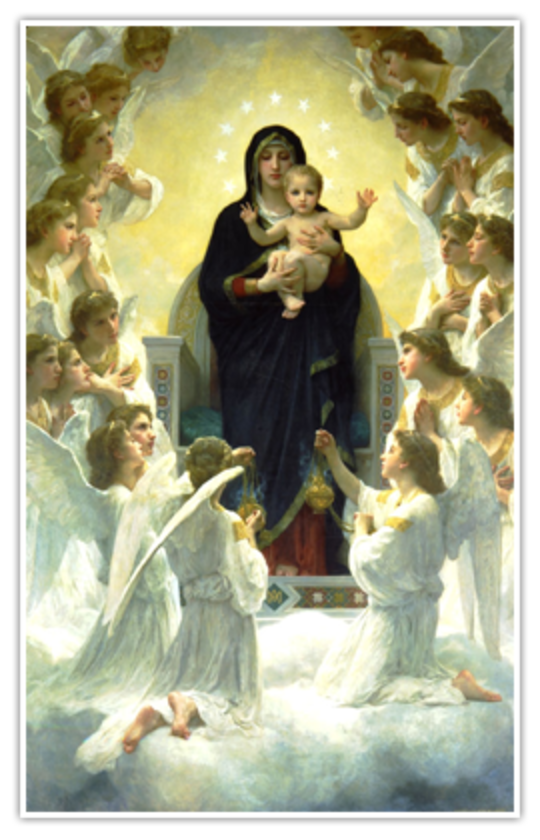 Gate of Heaven is a collection of original post-Conciliar Catholic hymnody in the Roman and Eastern Catholic tradition.

Although it is undeniably contemporary in style and influence, Gate of Heaven draws greatly from the Gregorian chant tradition, especially through its frequent linear, chant-like movement. The ancient modes oftentimes provide its melodic basis and harmonic structure.

Often employing ancient, venerable texts drawn from the common patrimony of both the Eastern (Byzantine) and Western (Roman, or Latin) rites, the texts of Gate of Heaven reflect Pope Saint John Paul II’s references to “the new flowering, the result of the Council, of a new expression of Catholic truth in a new theological language.”

The poetic and theological prose gifted the Church and the world through the writings of the saintly Pope Saint John Paul II evince his hallowed and inspired reflections about the Redemptive Mystery in Time. The centrality of the Theotokos, Mother of the Redeemer and our Mother, in the life and thought of our former Pontiff provides rich and unique contributions to the treasury of Roman/Byzantine textual sources.

Hymns found in Gate of Heaven incorporate original text material by the composer, as in To the Immaculata, a hymn in honor of Saint Maximilian Kolbe. Upon careful examination, it becomes evident that all the new texts employed in Gate of Heaven manifest an abundance of Catholic thought, tradition, and belief: the unparalleled Catholic ethos, as manifest in the interior life of the Church.

Oftentimes the music of Gate of Heaven is metrical, and, necessarily being a creative product of our own times and culture, the music reflects contemporaneity of influence. However, much of the music is also clearly reflective of the Gregorian chant tradition, especially through its linear, chant-like melody as in Hymn to the Immaculate Conception.

The hymn texts of Gate of Heaven are also notable for their frequent use of well-loved liturgical texts such as the Litany of the Sacred Heart in Hymn to the Sacred Heart of Jesus, and the Litany of the Blessed Virgin Mary, as in Gate of Heaven. From the West, the text written by Eustace of Sirena, in the 17th century is musically rendered in Our Lady of the Rosary. Whereas from the East, both the Hymn to the Holy Name of Jesus, Parts I and II, and Christ, Our Only Way, provide music settings to the translation of the anonymous 9th century Akathistos Hymn to the Holy Name of Jesus, rendered masterfully by the late Melkite Joseph Archbishop Raya (1916-2005), former Metropolitan of Akko, Haifa, Nazareth, and All Galilee.

Saint Joseph is honored as the Patron of the Universal Church; and Saint Michael the Archangel through Pope Leo XIII’s prayer to Saint Michael (Defend us in Battle). Profound contrition for our own sins and a plea for God’s mercy upon all errant and sinful members of the Church and the world are expressed in Miserere (Psalm 51), a hymn musically suggesting traditional Russian Catholic hymnody.

Many hymns of Gate of Heaven are devoted to the honor of Mary, the Mother of God, as in Ave Maria (Honored Daughter of our Race) with its joyous refrain of Ora pro nobis; Mary, Mother of the Church; and Patroness (of Our United States). Pope Saint John Paul’s poetic reflections upon Mary and her central role in salvation history as found in Redemptoris Mater are celebrated in Mother of the Redeemer (Ave Redemptoris Mater) and elsewhere.

Additionally, the Saints are honored through the occasional use of texts found in their own writings, such as those of St. Faustina (in her Diary), St. Maximilian Kolbe, St. John of the Cross (in his poetry); and John Cardinal Newman, as in his youthful, pre-conversion poem, Lead, Kindly Light. To honor his canonization, several new settings of the saint's poems are included.

Reflecting on the unique incarnational mysteries of Catholicism, the texts of Gate of Heaven acknowledge the Sanctity of Life, the blessedness of children, and the holiness of family life. Of Jesus, the Lord of Life, the Apostle for Life, Father Paul B. Marx, says,

This great hymn, Jesus, the Lord of Life, fills a real need in our Catholic churches today, where the music and hymnody most often seem far away from the promotion of the Sanctity of Life."

As in Jesus, the Lord of Life, many hymns of Gate of Heaven are profoundly didactic in nature, as in Mystical Rose and Protectress of Christendom. Not only is the rich Catholic ethos manifest throughout, but the texts are notably doctrinal. While set to strong, well-structured and truly musical melodies, Gate of Heaven persuasively expresses Catholic faith and belief. It fulfills Catholic hymnody’s function 1) to capture the popular imagination, 2) to instruct, 3) to inspire, and 4) to make manifest to the faithful the highest spiritual truths.

Finally, the psalms, the contemplative prayer of the Church, are clothed in winning yet un-gimmicky grace and profundity; the music rendering its role as servant of the ancient text, not its master.

The hymnody of Gate of Heaven fulfills the hope-filled observation of Monsignor Richard J. Schuler (1916-2006) that  “. . . a new expression of Catholic truth in a new theological language is coming from the Holy Father, Pope John Paul II. Signs of a new flowering, the results of the Council, are beginning to be apparent, even though many theologians continue to hold to the errors of modernism that surfaced just after the Council. . . As a new wind is blowing in theological expression, so in liturgy and Church music.“